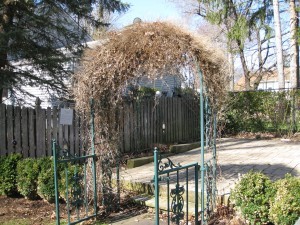 Last year, as you’ve read (and read, and read….), was a year for weather upheavals.  I was so looking forward to starting the new growing season on a new topic, but here in the Northeast, Mother Nature is toying with us again.

St. Patrick’s Day 2012 was a picture-perfect day in Northern Jersey, and I took the opportunity to get started on cleaning up my perennial garden and getting it ready for the new season.  Now, perennials have a habit of teaching us something new every year, even when we are seasoned gardeners.  This spring is no exception.  Due to an extremely mild winter with a cold snap in the middle, nature can’t quite figure out if it’s coming or going.  I saw bulb flowers sprouting and trees budding in February, only to be slapped by by a short shot of frost.  Fortunately the cold didn’t linger long enough to do any real damage, at least from what I’ve seen, the plants seem to be recovering quite nicely.

I headed out to the garden not knowing what to expect – when we get the cold weather we’re supposed to, the spent perennial foliage dies off, making it easier to spot and remove in the spring.  Due to the mild temperatures, this was not the case.  There are two schools of thought on perennial maintenance, and I really do feel that what you do depends upon your personal garden experiences.  Some gardeners like to clean up all of the dead foliage before the first snow hits.  I like to leave it until the early spring for several reasons, the first being that when the snow covers it, especially the clematis vines that cover my arbor, it makes for an almost magical winter display.  Secondly, I have learned from my years of trying (and failing) to successfully maintain roses, if you cut off too much too soon, the plant may not recover from winter die-back.  So, I choose to leave the mess for springtime when the weather is milder than in December, and I’m more in a spring cleaning type of mood.  So far, my plants have not suffered from the practice.

What I found waiting for me was a mix of old dead foliage, green foliage that had been damaged by the frost, and new tender shoots that were responding to the warmer temperatures.  This posed a challenge in a number of ways.  The old foliage, which for the most part pretty much pulls right out, was a little softer than usual, so it needed to be cut rather than pulled in order not to damage the new, tender stems.  I lost a few pieces of my heucheras because of over-zealous pulling (lesson learned).  I’m even thinking that it might not be a bad idea to keep an old pair of kitchen shears in your gardening tool kit for just this purpose.  It would be easier to get a closer cut with them than with regular garden cutters.

Once all of the dead stuff was cleared away, I had to make a choice as to what to do with the frost-damaged foliage.  Here is where common sense had to kick in, and only time will tell if I made the right choice.  Since it is still mid-March and technically the perennial growing season hasn’t even started yet, I opted to cut away just the foliage that was severely damaged, plus anything that was crowding out the new growth.  After all, we aren’t out of the frost window yet, and we have had snow in these parts as late as the end of April.  Trimming plants is like getting a hair cut – you can always take more off, but once it’s gone, you can’t put it back.  So I will keep an eye on things and cut back the rest of the damaged foliage once the new growth gets stronger and more established.

The saddest thing I found in my garden was the damage my butterfly bush sustained from the freak snowstorm in October 2011.  Since the snow hit while the plant was still in full bloom, many of the canes were snapped down into the old wood.  It will be interesting to see how well it bounces back.  It’s been the focal point of my garden for over 10 years, providing a backdrop for a half-dozen varieties of butterflies throughout the blooming season.  It is such a delight to watch the flutter of color from my kitchen window all summer long.  It will break my heart to have to replace it, so I’m hoping for the best.  So far, it seems to be recovering well.

I’m very excited about my perennial garden this year – it was planted in 2009 as a backdrop to my daughter’s college graduation celebration.  There is a bit of old perennial folklore that says, “the first year they sleep, the second they creep, the third they leap!”  Last year’s wild weather proved to be a perfect setting for creeping, and since this is the third growing season, I’m waiting for the leaping to begin.  And thanks to Mother Nature, they have a really good head start.